Be Enthralled When Nothing Happens 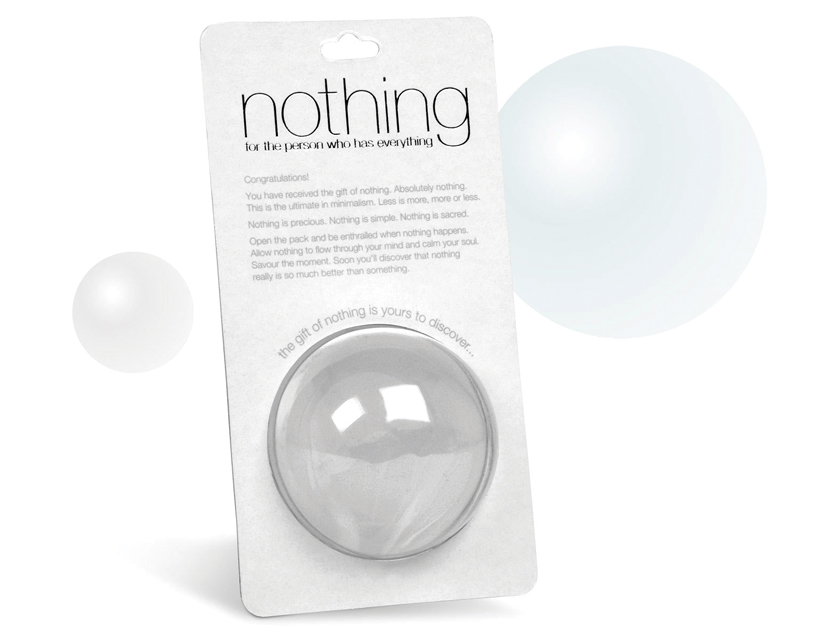 C-THRU is a helmet-mounted device that gives firefighters an AR view of their surroundings so they can navigate buildings in otherwise low-visibility conditions. The WiFi- and cellular-enabled devices transmit data to the cloud for the incident commander to track movements of team members on a tablet application. This allows for better control and coordination of the team in real time; incidents are recorded in the cloud for post-event analysis and training.

The technology is designed to make it safer for firefighters to navigate burning buildings and more effectively control fires.—Jeremy Losaw

It’s Nothing, really. And many who spent $5.95 for this gag gift complained it wasn’t even the nothing they wanted. They said it came in flat packaging, sans the clever text pictured: “Nothing is precious. Nothing is simple. Nothing is sacred. … Open the pack and be enthralled when nothing happens.” It’s pretty bad when you buy nothing and learn you were aiming too high.

Teenager Claire Du noticed it was hard to lift the carpets that were used as a surface when she trained with her rhythmic gymnastics club in Calgary, Alberta, Canada. So the China-born student designed and built a device to transport the carpets. Global News reported that her invention has two flaps on the side to support the middle of the carpet, with two big wheels on the back. She won a $1,000 youth scholarship award at the 2019 Immigrants of Distinction Awards and represented Alberta at the Canada-wide science fair.

The approximate number of Peeps—those marshmallow chicks and bunnies so popular at Easter—that can be made daily at Just Born’s Bethlehem, Pennsylvania, factory. Russian immigrant Sam Born founded the company in 1953.

1 National Inventors Month, held every May, was originated in 1998 by Inventors Digest and what other entity/entities?

B United Inventors Association of the USA

E None of the above

2 True or false: A major sports network listed artificial turf as the worst sports innovation of all time.

4 True or false: Thomas Edison, who lived in Port Huron, Michigan, from age 7 to 17, hated the town and vowed to never return.

5 Which celebrity inventor/entrepreneur and Inventors Digest cover subject accepted an invitation to work behind the counter at a Dairy Queen for a day?

D None of the above

1.D. 2. False. That dubious distinction went to performance-enhancing drugs. But player Dick Allen said of artificial turf: “If a horse can’t eat it, I don’t want to play on it.” 3. In 1839, Alexandre Edmond Becquerel discovered the photovoltaic effect that explains how electricity can be generated from sunlight. 4. True. 5.B. The Dallas Mavericks owner had been fined $500,000 by the NBA for saying, “Ed Rush might have been a great ref, but I wouldn’t hire him to manage a Dairy Queen.”