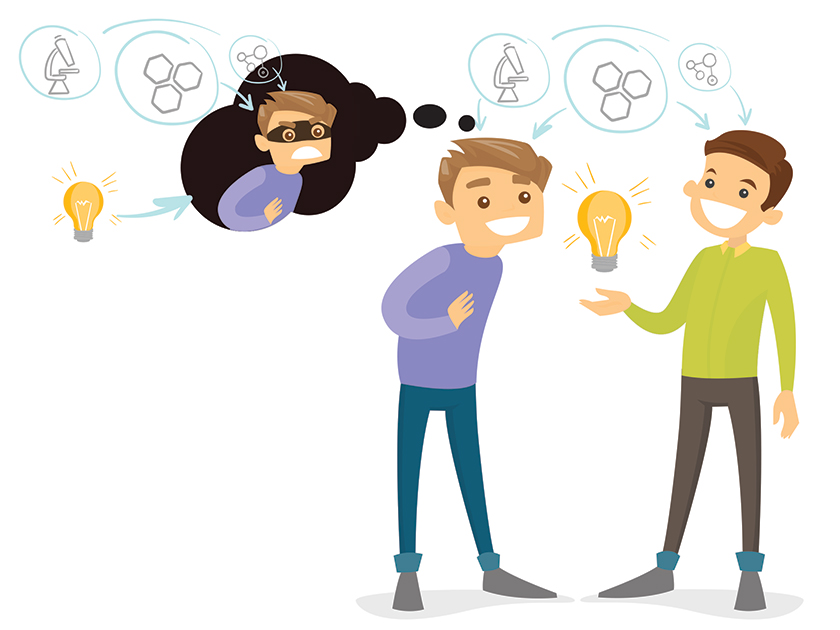 It’s a delicate dance to get a signed confidentiality agreement

Inventors need to know who can be trusted with their invention. The short answer: not many people.

Most inventors understand that a certain amount of paranoia goes a long way when dealing with an idea or invention.

Ideas cannot be patented, but every invention starts with an idea. When you have an idea that has been sufficiently formulated and described in a provisional patent application, you may even be able to license that invention idea without having received a patent. This all falls apart if you tell others about your invention or otherwise disclose your invention before a patent application is filed.

Worse, if you tell someone your idea without a confidentiality agreement, that person is free to use the idea without paying you anything. It can feel like the Wild West sometimes for inventors seeking to become entrepreneurs—whether their dreams are to license inventions, build a company to sell a product, or offer a service representing the invention.

Once your idea crosses the idea-invention boundary you can receive a patent—provided, of course, that it is new and non-obvious. But if you start telling others about your invention, they could make and use your invention without paying you. That is bad enough, but the mere act of someone else moving forward with your idea could forever prevent you from obtaining a patent.

First, inventors should assume that countries around the world (i.e., outside the United States) require absolute novelty in order to obtain a patent. This is an exaggeration—but not by much—and is the safest rule to follow.

Following this rule, which is an accurate description in many countries, will prevent you from many mistakes that would have negative consequences anywhere. What absolute novelty means is that, before filing a patent application, you cannot disclose your invention to anyone without a confidentiality agreement.

With patent agents and patent attorneys, the law immediately imposes a confidentiality agreement, so disclosing your invention to a patent practitioner without a written agreement is perfectly fine. With everyone else, you need a confidentiality agreement. Absolute novelty also requires that you not sell, offer for sale, or publicly use or demonstrate the invention before filing a patent application.

In the United States, on March 16, 2013, the law changed from “first to invent” to “first inventor to file.” There are exceptions, but extraordinarily narrow exceptions. So narrow are the exceptions to first-inventor-to-file that they are hardly worth mentioning.

So, inventors must consider the law as being black and white—file first before doing anything public, offering anything for sale, or disclosing the invention to anyone.

Unlike many foreign jurisdictions, however, if you did make a mistake and made some disclosure, public use or demonstration, or sale, in the United States, there is still a chance you can obtain a patent if the application is filed within 12 months of the earliest such disclosure, public use or offer for sale. So, if you are reading this and realize you made a disclosure before you filed at least a provisional patent application, the safest thing to do would be to immediately consult a patent practitioner.

Of course, the advice about filing first—which everyone should follow—begs the question: “Exactly how much paranoia is too much paranoia?”

After all, many inventors are going to need assistance from someone in order to bring their invention into being. And although inventors are very good at the invention part of the idea, they tend to need a great deal more help with the business aspects—simply because their acumen lies on the technical side of the spectrum.

Know who to trust

First, inventors need to know who can be trusted with their invention. The short answer: not many people.

For example, Sam invents a new and improved fly swatter.

The fly swatter is virtually idiot proof, and anyone can use it to kill flies no matter how uncoordinated. Sam wants to talk to Bob about possibly investing or partnering in the endeavor, and before Sam tells Bob anything, he wants a signed confidentiality agreement.

Bob has no idea what he is about to learn from Sam; maybe it’s good, maybe it’s bad, maybe he already knows the information. If Bob signs a confidentiality agreement, he is immediately opening himself to liability because he has promised to keep Sam’s information secret. If Bob already knew about Sam’s improvement to the fly swatter, the confidentiality agreement he signed will almost certainly say he doesn’t have to treat Sam’s disclosure as confidential.

For example, in the standard confidentiality agreement available on IPWatchdog.com there is a clause that reads:

This is a fairly typical clause for a confidentiality agreement.

But if you were Sam, what would you think if six months later Bob starts selling a fly swatter that looks remarkably like yours?  Sam will undoubtedly think Bob stole the idea and invention from him, and litigation could ensue.

You need to be wary

The above story is one very typical example of what can, and frequently does, happen. Inventors often think what they have is so unique that no one else could have ever come up with the invention without stealing it, but that is not as common as inventors think.

That is not to say that taking an invention or idea never happens, but there are plenty of creative people who can and do come up with nearly identical inventions. Just hire a professional to do a patent search on your invention and that will become clear.

Having said this, it is important to make a distinction. Many in the inventing community are well aware that there are some unscrupulous copycats knocking off products and inventions. They troll places such as  Kickstarter and have standing policies that if anyone raises a certain amount of money, they will immediately start working on the same thing in order to beat the start-up to market.

These unscrupulous actors exist, and inventors need to be wary of them. That is why filing a patent application first is so important. And if your product has a unique visual appearance, filing for design patent protection can be essential. Although weaker than utility patents, design patents can and do provide great protection against copycat knock-offs.

Returning to our example: If Bob is an investor, he has likely been pitched by many inventors. So it stands to reason that eventually, two inventors will have at least plausibly similar inventions. Thus, getting an investor like Bob to sign a confidentiality agreement can be quite difficult.

Sadly, one of the ploys used to gain inventors’ confidence is the promise to sign a confidentiality agreement. But those who operate in the shadows of the industry aren’t interested in taking your invention; rather, they plan on taking your money by selling you high-priced services for an invention that might not be patentable or is only capable of receiving extremely narrow patent coverage.

Their play is not to steal your invention but rather to make you think it is the best thing since sliced bread. So you hire this person or company to do a variety of work for a fee. These actors sometimes recommend design patents—which unfortunately have received a bad reputation in the inventor community as a result—and charge outrageous prices for their services.

Just because getting a confidentiality agreement is difficult doesn’t mean that you shouldn’t try.

There are those out there who are used to signing confidentiality agreements, such as manufacturers and engineers who you might need to work with to create engineering drawings or a prototype. Whenever you are showing your invention to someone within your industry or to those who would have the technical knowledge and ability to move forward with your invention without you, a confidentiality agreement is both essential and more likely to be obtained.

Just don’t expect investors or potential licensees to be all that interested in signing a confidentiality agreement—at least at first. However, if they like what they hear, it is not unheard of that at some point they might be willing to sign. So there is a delicate dance involved where one must reveal a little to entice the reluctant signer of the confidentiality agreement.