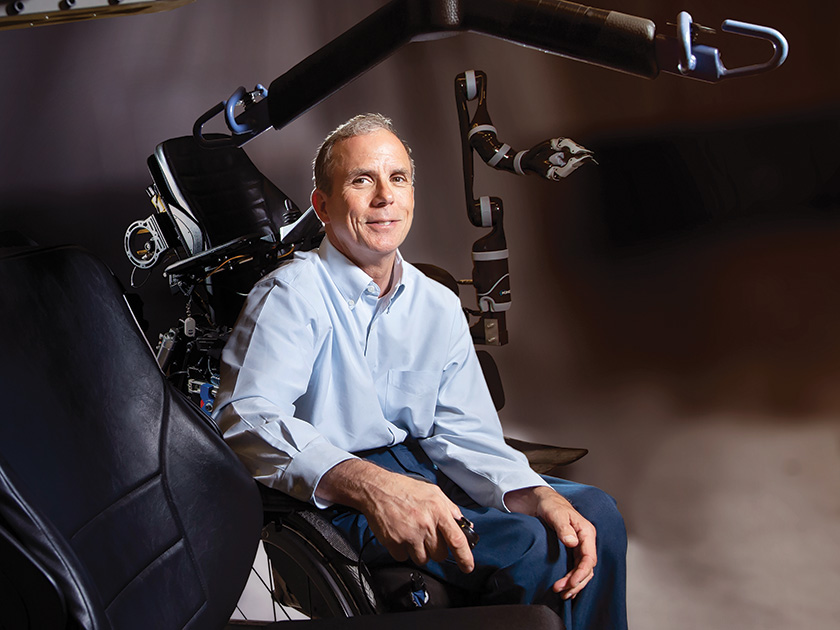 “Only people with disabilities and their families (related and chosen) know their experiences, goals and needs.”

Rory Cooper struggled to contain his pinballing emotions from the podium in Seoul, South Korea, while the world watched. The man always in motion had arrived in an almost unthinkable way.

Cooper had won the bronze medal in the 4-by-400-meter wheelchair relay at the 1988 Paralympic Games, his participation the culmination of an impossible dream—“thousands of hours of preparation and uncountable sacrifices by me, my families, and friends. It took tremendous discipline, effort and focus to get to the Paralympics. Winning a medal is a wonderful reward.”

But there was another, perhaps deeper, layer of joy.

“To me, the best part was the opportunity to be on the podium wearing the cloth of my country representing the hopes and dreams of the American people,” said Cooper, who also finished fourth in the 10,000-meter wheelchair race. “Having served in the U.S. Army, it was moving to once again serve and be an ambassador for the USA as a Paralympic athlete.”

Little did he know that his achievement would grow yet more in scope as the years passed.

More than 30 years later, Cooper sat in front of a much smaller audience. The inventor of many advanced mobility devices and assistive technologies as well as a high-profile advocate for people with disabilities, he was a guest speaker at the United States Patent and Trademark Office’s National Summer Teacher Institute on Innovation, STEM, and Intellectual Property, at the University of North Carolina at Charlotte.

“It was exciting to meet and interact with the highly motivated and engaging teachers in attendance,” said Cooper, who has 20 patents awarded or pending. “The USPTO Education team put together an excellent program that is fun, educational and inspiring.”

The appearance was another day in his life’s mission that built unstoppable momentum on that day in Seoul. Cooper eventually “came to realize the enormity of the accomplishment, as I had joined an elite international community dedicated to elevating the lives of all, especially people with disabilities.”

But this richly awarded icon in the assistive tech arena derives his greatest pleasure from being part of an enormously talented and dedicated team at the University of Pittsburgh and the U.S. Department of Veterans Affairs, with historically innovative collaborations of their own.

Cooper is director of the Human Research Engineering Laboratories at Pittsburgh. His excitement is palpable once he begins talking about HERL, which has created innovations in wheelchairs, robotics, adaptive sports, wearable devices, medical instrumentation and accessibility.

“HERL itself is what I would consider my most important accomplishment,” he said. “Next to that, it would have to be the people who have trained in HERL and have gone on to carry the mission forward”—engineers, physicians, therapists, business professionals and other scientists, many of whom are women, veterans or people with disabilities.

Firsthand understanding of those challenges is crucial, so HERL actively seeks those people.

“Our greatest strengths are the ability to assimilate and integrate differing professional skills, personal perspectives and experiences, and to adapt and integrate knowledge and technologies from diverse fields. The key ingredients are passion and competence.”

Cooper cited HERL’s SMARTWheel as a shining achievement that led to other advances: “It has changed wheelchair biomechanics and ergonomics studies, wheelchair provision and training, and led to breakthroughs that have greatly improved the health and function of veterans who use wheelchairs.

“The SMARTWheel subsequently contributed to many advances—power assist devices, ergonomic pushrims such as Natural Fit and Surge, Americans With Disabilities Act Standards and Guidelines, and improvements in wheelchair design, insurance coverage, provision and fitting and training.”

It doesn’t take a person with a physical disability to understand the toll a manual wheelchair can exact on the human torso, arms and hands. This is perhaps SMARTWheel’s greatest benefit, Cooper said.

“It has driven the incidence of shoulder and wrist injuries to manual wheelchair users from circa 80 percent to around 20 percent,” he said.

“There are several other innovations that have transformed lives, such as the joystick compensation algorithms and methods used on essentially every powered wheelchair in the world. More recently, the virtual seating coach is using machine learning and contextual awareness to dramatically reduce prevalence of pressure injuries and lower limb swelling.”

Cooper said it would take a book to describe the innovation at HERL.

Part of the assistive technology movement is educating the uninitiated who falsely assume too many limits for people with disabilities. Cooper has experienced this lack of understanding countless times since he was paralyzed in 1980 while stationed in Germany. He was on a bicycle and was hit by a bus.

He is still surprised by the number of people who ask him whether he drives; how he gets his wheelchair into his vehicle; and how he is able to participate in marathons. (Cooper also participated in the tech-driven Cybathlon power chair race in Switzerland in 2016.)

“Certainly, people with disabilities, especially obvious disabilities, are pervasively underestimated,” he said. “Technology has made it possible for wheelchair users to participate in a wide range of activities at home, in their communities, in work and school environments.

“There is still much room for improvement, but technology enables people to live much fuller lives than just a few years ago.”

As one of the world’s leaders in that discipline, Cooper has received a litany of national and international awards as well as extensive media coverage. In character, he said the greatest benefits of this occurs on a larger scale to benefit others.

“Awards are nice but not really important,” he said. “What is important is the recognition and attention that the contributions receive so that they may help raise awareness, motivate more talented people to enter the field, and bring attention to the abilities of people with disabilities.”

Some of his recognition has a great cool factor: He appeared on Cheerios boxes in 2009, and he is featured in a USPTO Collectible Trading Card series of inventors.

Cooper is also excited about efforts around the world to further the mission of assistive technology. He ticked off pioneers and leaders such as Hugh Herr of MIT Media Lab; Gregg Vanderheiden at the University of Maryland; Jongbae Kim (Yonsei University, Korea); Urs Schneider (Fraunhofer Institute, Stuttgart, Germany); Maja Matarić (University of Southern California) and Alex Mihailidis (University of Toronto).

When asked about the most important technology in the field, Cooper didn’t hesitate.

“Robotics, robotics, robotics. The breakthroughs changing the landscape are coming from adapting and advancing robotic technologies with physical robots and software robots.

More exciting is the apparent eventuality of the next impactful technologies.

“We’re currently working on some breakthrough technologies that (we) are not yet ready to disclose,” Cooper said. “We’ve been working on creating and updating a research and development road map based on consumer demands. We’re working to improve human-machine interfaces, intelligent systems and robotics, wearable and in-home technologies, and better designs for wheelchairs, adaptive sports equipment, and other devices.”

Cooper sees a limitless landscape for assistive technology, with the hope that its advances escalate as rapidly as the world has witnessed in the past few decades.

“There will be more users as professionals in the field. Assistive technology will evolve to be more mainstream inclusive.”

Best of the best