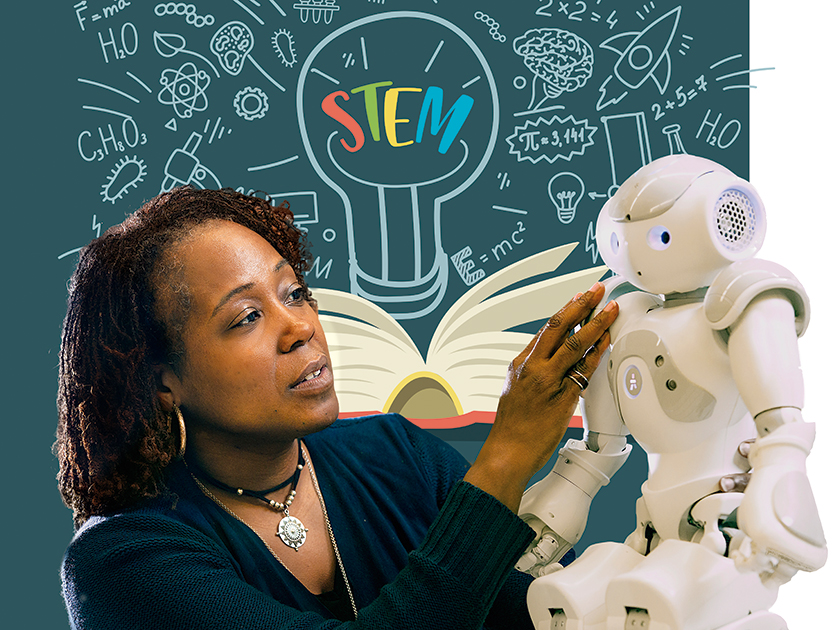 “If we as women don’t understand (patents’) value, we’re not going to make the effort—often because we have other greater problems within our work environment to address.”

Dr. Ayanna Howard is an entrepreneur, innovator, educator and an international expert in robotics who began her career working at NASA’s Jet Propulsion Laboratory on research to develop the next generation of Mars rovers. She recently shared her thoughts on increasing diversity among patent holders, the importance of intellectual property to start-up success, and female innovators in STEM fields.

Currently, Dr. Howard is the Linda J. and Mark C. Smith Professor and Chair of the School of Interactive Computing at the Georgia Institute of Technology. She is also founder and chief technology officer at Zyrobotics, a technology company dedicated to developing mobile therapy and educational products for children with differing needs.

I was impressed by her March testimony in front of the House Judiciary Subcommittee on Courts, Intellectual Property, and the Internet in regard to student success and access in intellectual property education.

This interview was edited and condensed for clarity and length.

How were you introduced to STEM, and who were your early role models?
My dad started off as an electrical engineer and my mom was a math major, so our house was heavily involved in math and science. My parents were really my role models, and I was also fortunate to have great teachers and mentors who helped cultivate my interest in STEM.

You worked at NASA in the early 2000s and were funded by the Mars Exploration Research Program. How did you get on board with their research projects?
I started at NASA as a summer intern after my freshman year of college and remained with the agency through my masters and doctorate degrees. So by the time I became a full-time employee, I was already indoctrinated into the NASA culture. I really wanted to be a part of the robotics team, and I had a new supervisor who was looking for someone who could work on long-range navigation, so I signed up and came on board.

You mentioned that you had great mentors who helped fuel your interest in STEM. Did that experience lead to your own involvement in outreach toward girls and young women?
Absolutely! I was exposed to engineering at a very early age, so by the time I became aware of any negativity surrounding women and especially black women in engineering, I had already fallen in love with it. Now as a mentor, I’ve had the chance to be involved with similar outreach programs aimed toward girls and young women.

I ran a Saturday program at NASA for girls where we’d do hands-on activities. I also led an undergrad program to keep women engaged in STEM because there were a lot of dropouts at that level. We’d take them to the NASA Jet Propulsion Laboratory for tours and organize lunches with female engineers and scientists at NASA to keep their STEM spark alive.

How did your work in designing robots lead you to develop therapeutic and educational products for children with disabilities? What was the connection?
One summer I ran an outreach camp for middle school students and I had a participant with a visual impairment. As an engineer, I thought, “Why is there no technology to assist her?”

I started to look into finding out more about the world of accessibility. It took me down a path where I realized there’s a whole demographic of kids who aren’t being served by technology. This was truly an underrepresented population. So I found a way to use my engineering and training to create technologies that could change lives, and that’s when I started pivoting to education and therapy for children with special needs.

How does intellectual property fit into your story at Zyrobotics?
I understood very early on that start-ups need a defensible platform in order to succeed. Once you’re hitting milestones, it’s very easy for a larger player to come in and chomp away at you.

From the beginning, the question was, “What can we patent?” But it’s expensive to patent and as a start-up you don’t have a lot of money, so the next question was, “What are the high-priority items we could patent that make sense?” We started by funding those.

The numbers don’t report on how many women file patents versus how many receive them. So there are many individuals, I think, who might file a provisional patent (application) but who don’t then convert it into a full, defensible patent.

Patents take work and require many iterations, and if we as women don’t understand their value we’re not going to make the effort—often because we have other greater problems within our work environment to address. We have all of these other issues to fight, so then also navigating the complicated patent office falls to a lower priority.

How might a more robust pro bono patent attorney system level the playing field, especially for women?
One of the biggest barriers to getting a patent is that it’s expensive. For start-up founders, that money usually comes out of pocket, which is tough for women who are also often caregivers and breadwinners.

But start-ups are very used to giving away equity. Imagine you have a law firm where taking on a pro bono case allows the firm equity in a company, even if it’s 1 percent. So now they get a stake in the company for being a nice lawyer, and it’s win-win. Those kinds of creative structures could be a good first step.

In your experience, how do academic researchers think about intellectual property?
At the university level, there’s a disconnect. As researchers and scientists, we produce IP all the time, but science is all about sharing knowledge, it’s not about keeping it stored away in your lab.

We publish as much as we can and show others in our field how they can reproduce our research. And that’s almost counterintuitive to the nature of patents. Most academics look at patents and just see them as something nice to have; they don’t rise to the same importance as having peer-reviewed publications and sharing the research associated with those.

What are your ultimate goals for your research and your work?
At Georgia Tech, my ultimate goal is to provide methods and tools to change the landscape of accessibility with respect to therapy, robotics, and AI. At Zyrobotics, my goal is to provide low-cost or free resources to people who need it most, particularly those from low socioeconomic status backgrounds and communities with large populations of special needs.

Have you seen positive changes or progress in recent years for women in STEM or robotics?
Oh, yes, and I’m seeing it firsthand at Georgia Tech. There are a lot more of both female undergraduate students and graduate students in STEM fields. I’ve definitely seen an increase, and although it’s not on parity with the population, it’s trending upward. That gives me hope.

Favorite book: “The Robot Zoo: A Mechanical Guide to the Way Animals Work”