The Origin of Invention 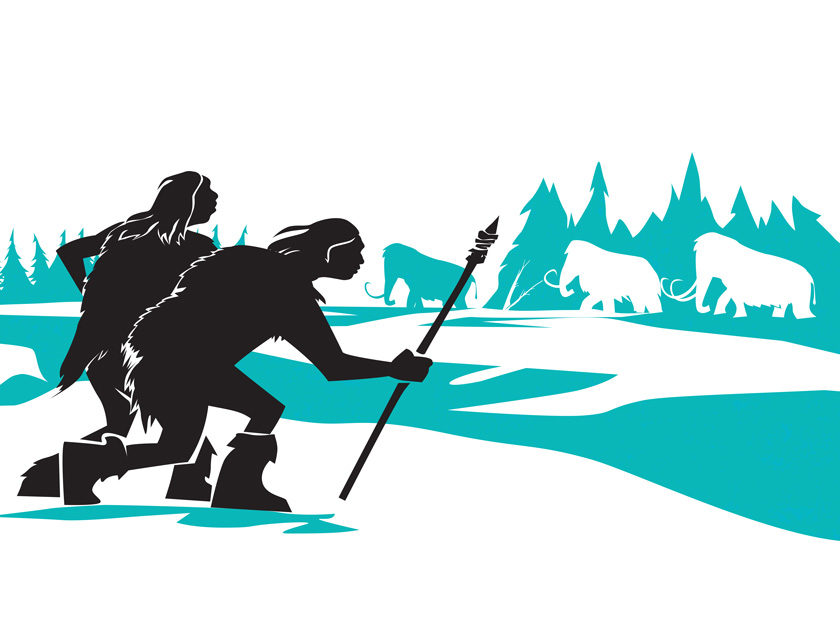 If I had to pick a time when progress began its greatest acceleration, I’d say it was with the invention of the bow and arrow, followed by the atlatl.

Two shapes have been found by archeologists: pointed, like an arrowhead, probably used for killing and butchering animals; and an oblong or round shape, broken in a way that reveals a relatively blunt angle cutting edge. The cutting tool—known as a hand ax—was probably used to skin animals, chop branches and small limbs for firewood, and for protection if attacked by a predator. The Homo habilis time period ranges from about 2.4 to 1.7 million years ago.

Anthropologists speculate that Homo habilis also may have used the hand ax to sharpen sticks with which to spear animals. We know that present-day chimpanzees chew a point on the end of a stick and use it to kill galagos, also known as bush babies. These small primates, about half a pound, hunt at night. They sleep in trees during the day and are an easy target for the chimps.

We can only guess whether Homo habilis or the chimps were the original inventors of the spear, and when it was invented. Wooden tools from that period have long ago decomposed.

But it makes sense that a species which shaped stones to a point would also have invented a wooden version with a long handle. And a spear can be gripped with two hands, enabling a powerful thrust. No doubt the spear served as a defensive weapon against predators, as well as a hunting weapon.

Homo habilis eventually gave way to Homo erectus, whose brain size increased to around 900 cubic centimeters—about 40 percent larger than Homo habilis. In addition, the Homo erectus body changed to be more like ours today.

During the Homo erectus time span, from 1.7 million years ago to 200,000 years ago, tools improved in shape. The early tools were made from flint, and their edges were not sharp like a steak knife.

But the discovery about 1.4 million years ago of obsidian, a black, glass-like stone, enabled the invention of extremely sharp tools that could serve as knives or hide scrapers. An obsidian stone is struck in a certain way that results in the splitting off of a thin chip with an edge that is sharper than a scalpel. In fact, obsidian scalpels are preferred by today’s surgeons for certain operations.

The scarcity of samples of all very old tools makes it impossible to state exact dates for any kind of tool or process. Thus, it is possible that the javelin and spear were invented around the same time. It’s hard to imagine a hunter not being tempted to throw a spear as well as stab with it, and making it lighter to increase its thrown range would have made sense.

The hand ax was also improved. Rather than a crudely shaped tool, made without much thought for hand grip, the hand ax was formed with impressions for thumb and forefinger.

This enabled fine control for the butchering of meat and the scraping of hides for clothing, invented about 500,000 years ago. (This date is controversial due to the rarity of finding preserved hides, which, of course, decomposed easily. But the migrations of early hominins into Europe and Asia, possibly more than a million years ago, suggests that hides were fashioned into wraps or coats due to the need for warmth.)

The bow and arrow

As you can see in the span from 2.4 million years ago to 200,000 years ago, invention progressed very slowly. But at the end of the Homo erectus era, our brain had at least doubled in size from its start as Homo habilis to our present volume of about 1,350 cubic centimeters.

Homo erectus graduated to the brainy species we now call Homo sapiens (wise human). And tool and weapon inventing progressed at a much faster pace, although still very slowly compared with the industrial revolution of the past 260 years.

Perhaps the most remarkable invention of the early Homo sapiens was the bow and arrow. This weapon allowed the hunter to effectively take down a small- to medium-size animal at a maximum distance of about 100 feet, enabling hunters to more easily avoid detection and increasing their supply of meat. The bow and arrow was invented about 70,000 years ago.

Another remarkable invention was the atlatl, a javelin-throwing device created to extend the javelin’s effective distance.

The advantage of the javelin over the bow and arrow is its ability to bring down larger animals. Evidence suggests that the atlatl was invented by Homo sapiens about 40,000 years ago.

So, around this time the Homo sapiens species was on a roll, leaving the subsistence level, and enjoying time for art and crafts.

Cave paintings date back 44,000 years. More than 350 caves with paintings have been discovered so far. And basket weaving began as early as 29,000 years ago, an invention that made gathering more efficient.

The leisure that resulted from these various inventions dramatically increased the efficiency of hunting and gathering. And the calories derived from meat eating greatly reduced the amount of time required for gathering vegetables, fruits and nuts.

Then, about 12,000 to 10,000 years ago, humans began farming. At first, the venture depended on continuing hunting. But as expertise in cultivating crops grew and means of storing during the off-season were developed, humans were able to settle in one location.

The discovery of copper about 9,000 years ago led to the casting of tools such as knives, axes and plowshares. Copper was not a hard metal, but such tools were superior to stone, and the age of metals had begun.

The invention and manufacture of pottery began about 8,000 years ago, which added to the ease of preparing food. Also, the ax handle was invented around this time. This greatly eased the cutting of firewood and preparation of framework for housing and barns.

Then, about 5,000 years ago, the alloying of copper with tin created an amazing new metal—bronze—which was much harder and more durable than copper. Bronze was the transistor of its day for another 3,600 years until iron was discovered and displaced bronze as the most durable of metals—especially after the addition of carbon, thereby inventing steel.

Also about 5,000 years ago, farming had improved to the point that grain became not just food but currency. It was stored and traded. A system of counting and writing was needed, and cuneiform was invented by the Sumerians about 3,500 years ago.

Apparently, hunting was not altogether abandoned. Beautifully crafted spear and arrow point, known as Clovis points, were found in New Mexico about 13,000 years ago. Their edges are very sharp due to a method of precise chipping called knapping.

Thus, the origins of invention began 2.5 million years ago. The tools and weapons were crude, their use imprecise. Progress was painfully slow.

If I had to pick a time when progress began its greatest acceleration, I’d say it was with the invention of the bow and arrow, followed by the atlatl.

However, before we congratulate Homo sapiens as the originators of invention, we should take a closer look at our cousins, Homo neanderthalensis.

Neanderthals probably were the inventors of the bow and arrow, and maybe even the atlatl. They had migrated to Europe and Asia more than 300,000 years before the Homo sapiens. Neanderthals had the edge when it came to expertise regarding their environment, and inventing to fulfill their needs.

Neanderthals and Homo sapiens lived in the same territories, interbred to some degree, and each species learned from the other. Far from a knuckle-dragging brute, Neanderthals probably were more intelligent and sophisticated than Homo sapiens.

The Neanderthals buried their dead with great care—including artifacts, possibly for an afterlife. Their brain size when they became extinct 30,000 years ago was about 1,400 cubic centimeters, compared with 1,350 for us sapiens in the present time.

You may have sensed that I’m a bit prejudiced. My recent DNA analysis reveals that I’m 3 percent Neanderthal.