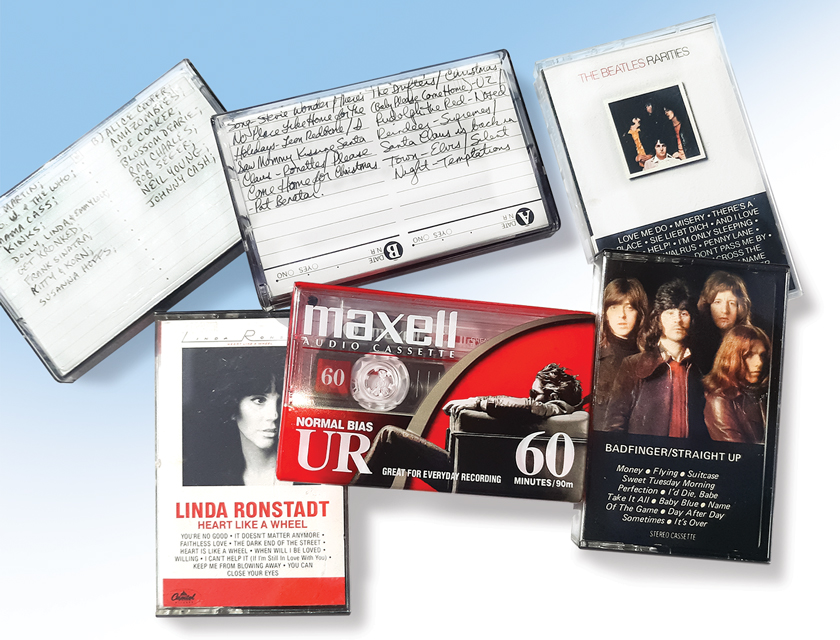 Cassette tapes gave us the chance to be our own DJs, facilitate new music genres, and solidify friendships

Lou Ottens finalized his invention in 1962. It is estimated that more than 100 billion cassettes have been sold since.

It was the best of rhymes; it was the worst of rhymes. During the post-college decades that my lifelong best friend and I made and swapped dozens of cassette mix tapes, our love for music fortified an enduring bond. With creations that ranged from electric to eclectic to pathetic, one of our many shared delights were lyrics that could be amazing or amusing.

And Loretta Lynn’s “Coal Miner’s Daughter”: The work we done was hard/At night we’d sleep, ’cause we were tired

Miss Loretta’s lyrics require an explanation. Her heavily Southern pronunciation of “tired” came out “tarred”—which, with all due respect, earned her our honor of this fittingly rhyming distinction: Worst Song Rhyme of All Time.

We all can thank Lou Ottens for giving us the ability to play DJ via creating our own playlists (sans commercials) while buttressing our musical interest and appreciation. The Dutch inventor and engineer, who died March 6 at 94, not only invented the cassette tape but pioneered its successor, the compact disc.

Reel-to-reel and even home tape recorders had forever been bulky when Ottens began conceiving a smaller alternative in the early 1960s while leading the product development department at electronics conglomerate Philips.

“He had a wooden block made that fit exactly in his coat pocket,” Olga Coolen, director of the Philips Museum in Eindhoven, The Netherlands, said on the Philips website. “This was how big the first compact cassette was to be.”

Ottens finalized his invention in 1962; Philips estimates that more than 100 billion cassettes have been sold since. Especially during the less copyright-enforced times of the late 1900s and early 2000s, music aficionados recorded their favorite songs playing on the radio as well as from records and other sources.

The Beatles’ arrival in America was almost a year away when Ottens’ team presented its plastic-encased cassette tape to the world at a 1963 Berlin Radio electronics fair.

Small and smaller was de rigueur for electronics, with the transistor radio fast becoming a household staple. So the new product’s slogan, “Smaller than a pack of cigarettes!”, had more than a whiff or timeliness and relevance.

Ottens recalled the cassette tape as an instant hit (though other accounts dispute this). Interest was verified by emerging attempts to duplicate: Japanese companies created their own version before Ottens reached a deal between Philips and Sony that would ensure his team’s product would become the patented cassette on the market.

But the widespread popularity of the cassette tape was pre-empted by the mid-Sixties emergence of 4-track and 8-track tapes for car stereos, the latter an omnipresent but significantly flawed presence from the early 1970s to early ’80s. Eventually the cassette’s more compact format—and especially the ease with which music could be recorded with acceptable quality—made it the primary consumer music medium of choice into the early 1990s.

Though proud of his achievement, Ottens always seemed more focused on the fact there would always be The Next Big Thing in Little Things.

“Of all the musicians and historians I interviewed for the cassette documentary, Lou was by far the most critical of the format,” Zack Taylor, the director of “Cassette: A Documentary Mixtape,” told Rolling Stone after Ottens’ death. “When I arrived on his doorstep in 2013, I expected to find a proud engineer, ready to take a bow and talk about the revolution he helped start.

“In reality, Lou couldn’t understand why people were still talking about the primitive, lo-fi cassette, even as the format celebrated its 50th anniversary. As an engineer, he was always focused on fidelity and reliability.”

No fidelity concerns there. Those screams from “Monty Python”—followed by the sound of a record player needle being yanked across a record—were a regular interruption in the tapes my friend and I made and shared. (You can hear the 7-second clip on vimeo.com.)

We would record a few seconds of a stunningly bland hit song by, say, Hall and Oates, and then drown it out with the Monty Python yelling.

Sophomoric comic relief? Sure. But it also demonstrated an attractive feature of recording on cassettes: If you practiced enough and became really good at it—as both of us did—you could end up with seamless segues that had no sound gaps. You could also record very short snippets or even single words from a song, quickly hit Pause on the cassette recorder, and ultimately create a creatively unique mishmash of “music.”

(My friend once embarked on a tirelessly incredible project that should have been played at every radio station: He recorded every “Yeah,” “Oooh” and similar sounds from every song on every Beatles album and “spliced” them together—with not a single second of “dead air.” The result, which I recall lasted almost 10 minutes, will never be heard by anyone else. We both lost our copy of the tape.)

This ability to “chop up” songs and create something new was prominent in the emergence of hip-hop. It also led to playlists on Spotify, the dominant digital music streaming service provider.

Of course, the practice of recording onto cassettes from the radio or other conventional music sources was not well received by the music industry. “Home Taping is Killing Music” was a prominent slogan during the 1980s.

But making a noncommercial mix tape such as an analog audiocassette of copyrighted songs is immune from claims of copyright infringement, per the Audio Home Recording Act of 1992. That law requires manufacturers or importers of devices and media such as blank CDs, personal audio devices, automobile systems, media centers, and satellite radio devices that have music recording capabilities, to make royalty payments.

Redbullmusicacademy.com provided an excellent insight into how music cassettes facilitated the growth of hip-hop, as well as many other music genres, when taping music onto cassettes was seen by some as a dirty little secret.

“The cassette was also giving legs to many niche musical movements that otherwise would have remained frozen in place. Not just hip-hop but metal, hardcore, industrial, New Age and more. It’s probably not a coincidence that these genres all emerged during the late ’70s and ’80s as the cassette tape rose in prominence. …

“A dub of a tape could travel hundreds of miles and in the process spawn off a dozen more copies. New Yorkers could slide dubs to out-of-town cousins. Bleary-eyed suburbanites could record late-night radio shows off the airways and spread those static-blanketed secrets outward.”

Ottens helped co-create the CD in the 1970s. The combined effort by Philips and Sony made its public debut in 1982.

He retired four years later with one big regret: A rival company, Sony, created the iconic cassette tape player known as the Walkman.

But it was never difficult for him to move on. Ottens eventually used the original prototype wooden block for the cassette to prop up his jack while fixing a flat tire, and left the block by the side of the road. He was preoccupied with the progression of superior sound quality, nothing else.

My friend and I saw it differently, and still do. So did the millions of others who created 60-, 90- and even 120-minute love odes with their favorite and most personally important pre-recorded songs.

He recently wrote how our friendship would have been different without our tapes—carefully conceived and crafted over the years through marriages, divorces, moves across the country.

It wasn’t just the enjoyment of the music and often listening to the results together; it was the great technical care that went into each tape, from the songs to the cover art. We were much less focused on pure sound quality.

The same was true for my siblings, all seven of whom made at least one cassette mix tape for me. I still own them all.

The fast-forward and reverse functions on my cassette player don’t work anymore. But it’s still a simple, comforting joy to sit back, figuratively hit the reverse button on what has been a beautiful life, and to laugh and remember.

Lou Ottens was never sentimental about the cassette tape being replaced by the CD. “Everything disappears in the world when it has done its time,” he said. “So will I.”

Cassette production does not rival that of vinyl and CDs, but demand is there—possibly because people are hoping they become collectibles that appreciate in value. The Killers and Lady Gaga are among the acts to recently release their music on cassette; the latter’s “Chromatica” was the format’s biggest seller in 2020 with 14,000 copies.

Ottens noticed the surge in recent years. He called it “nonsense” because the audio quality of the CD is stronger.

Don’t toss your music cassette tapes without checking out this list.

There is big money in some cassette titles. Discogs reported in February of this year that among its 100 most expensive cassettes sold, every item goes for $500 or higher.

This self-titled, self-released demo tape is one of the only recordings of the California-based group when it still went by Xero in the 1990s. Discogs reported that only 12 of its users claim to have it in their collections.

Linkin Park released its debut full-length album, “Hybrid Theory,” in 2000. That brought the nu-metal genre into the mainstream, adding interest to the Xero days.

This promo tape—handed out to attendees of a Paris Fashion Week show in 1995—was the most expensive music cassette from 2016 until recently. The tracklist features the artist’s (The Artist’s?) well-known songs, remixed or edited.

United Dairies (no typo) is a UK-based label that launched in 1979 with an LP from the Steven Stapleton-led project Nurse With Wound.

After Stapleton took over label operations in 1987, he dropped this catalog-encompassing, 32-chrome tape box set complete with a convenient suitcase for storage. It was only available by mail order, with an edition of 50.