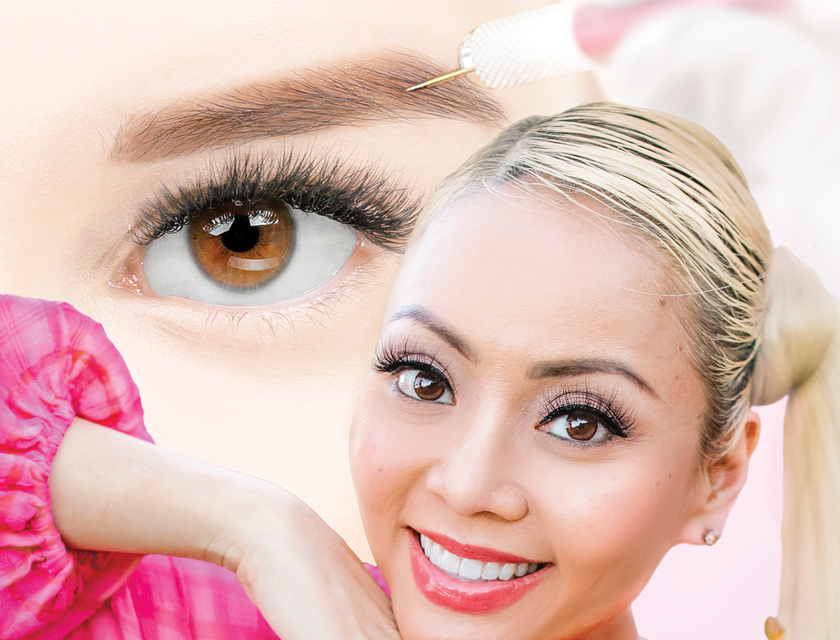 The semi-permanent tattooing technique, in which pigment is deposited into the skin, began gaining popularity in the mid-1990s in Asia before recently exploding across Europe.

“The universe will bend if you stand up to it. Ask for what you want, and don’t take no for an answer.”

In just the past few years, the ancient process of permanent makeup has been getting a face-lift in the United States.

Microblading eyebrows, a semi-permanent tattooing technique in which pigment is deposited into the skin, began gaining popularity in the mid-1990s in Asia before recently exploding across Europe. Today, YouTube teems with tutorials and myriad styles from ambitious amateurs, polished professionals, and people who should not be cutting paper with rounded scissors.

So it seems fitting that one of America’s most widely known and respected practitioners of the art was born in Quezon City, Philippines.

Sheila Bella—mother, artist, entrepreneur, innovator, motivator and self-described part teenager—is among America’s microblading pioneers, having performed thousands of procedures and trained all of her artists as founder and certified lead artist of Sheila Bella Microblading in North Hollywood.

“I was one of the first people to do microblading on celebrities and models in Los Angeles and other places across the United States, introducing it to this region of the world,” says the effervescent mother of two with a third on the way. “Permanent makeup was outdated and unnatural looking, but learning microblading took it to the next level.

“How many cosmetic procedures can you name that have been around in the United States for such a short time? It is a baby in terms of cosmetic treatments. It has a long way to go.”

It’s in the pattern

They all involve essentially the same goal as microblading, in which a fine, pen-like tool with 12-15 tiny needles is used to cut the skin in a hair-shaped line. The line, or “stroke,” is then filled with ink to form a row of hairs that simulate real eyebrow hair.

Many artists have crossed hairstrokes in an X pattern to replicate how real-life hairs cross. But this can injure the skin and end up looking less natural.

Bella says it is essential for an artist to recognize and follow an individual’s hair pattern.

“Back in the day, PMU (personal makeup) was done with a machine and a very unnatural picket fence pattern. I myself had gotten it done this way long ago.

“Microblading follows more natural hair patterns. Not everybody has the same hair pattern.

“Hair patterns are like snowflakes and fingerprints. You can’t just learn one and stamp that on every client who comes in. Our unique hand tool provides a specific form of the needles that allow artists to create the look of fine brow hairs on the skin.”

“When clients have their eyebrows done first, we consult to see what style and shape they desire,” says the woman with 15 years’ experience as a professional makeup artist for leading brands including Chanel, Lancôme, Benefit and Clinique.

“Next is the design process, where the artist will design the eyebrows with a pencil to preview what the tattoo will look like. Once the shape and color have been pre-selected and approved by both the client and artist, the numbing process begins.

“We use topical numbing to ensure the comfort of our clients.

The entire process from beginning to end takes about 2 1/2 to 3 hours.

And the healing process is about two weeks in total. Keep in mind that permanent makeup is a two-session procedure in most cases.”

Determination in the genes

Whether talking about her business or herself, Miss Philippines USA 2004 exudes charisma and easy candor that put people around her at ease.

“I feel like I am 17 years old half the time,” she says. “I wake up in the morning and think, ‘Why am I in charge of these people, and who am I to be running a multi seven-figure business?’

“Not only that, I know I look like someone you typically wouldn’t be able to take seriously as a businesswoman. My makeup is at least an inch thick! I wear gaudy, sparkly jewelry and clothes only little girls like.

“If anything, success has helped me be more comfortable looking and dressing the way I have always wanted to, but sometimes I was too afraid to because I thought it would hinder my success.

“The universe will bend if you stand up to it. Ask for what you want, and don’t take no for an answer.”

The determination is in her genes. After moving to America at 8, she grew up in a family of 10 as her parents provided for their kids “through strategy and grit.”

That sturdy work ethic resulted in her starting her own company as a young adult. Platinum Vocals Inc., a children’s performing arts school, helped propel young artists with no experience to stardom. But in 2009, she left a bad relationship and decided to reinvent herself.

She dabbled in modeling, acting and singing while seeking her perfect career fit. There were setbacks and hard times.

As she says on her website: “I don’t come from money. I’m not married to money. … My last job was waiting tables in a schoolgirl outfit at Dillon’s Irish Pub serving avocado fries” before meeting her husband, Will.

Her priorities changed, including a stable career.

She decided to be a permanent makeup eyebrow artist, eventually becoming one of the first microbladers in Los Angeles after teaching herself on Google and through mentors and online courses. She literally did the legwork to build her brand.

“I remember getting dressed to the nines as if my calendar was full. My face beat was serious. I marched up and down Ventura Boulevard, passing out my brochures at hair salons and medi-spas asking owners if I could leave my brochures in their waiting areas. …

“When the phone started ringing for appointments, I pretended to be my own receptionist and answered in the most professional voice I could muster. … I also didn’t have money for a web designer, so I spent three weeks locked in my apartment learning coding from YouTube and building my website.  … There wasn’t a Chamber of Commerce breakfast meeting I didn’t do …

“When people asked me to showcase my product, I spoke with the confidence of a seasoned pro. Why? Because I had to. To me, failure just wasn’t an option.”

Her company opened in 2011. It has served about 11,000 clients, now has more than 25 employees and makes over $1 million in revenue each year while helping people.

As with many innovators, Sheila Bella saw an emerging existing invention or trend and put her own personal stamp on it. For her, a relaxing environment is essential.

“Listen, you can get high-quality PMU nowadays from a lot of artists. But Sheila Bella Microblading is an oasis for women that leaves you feeling like you just hung out with your best gal pal for a few hours. Our mission is to send every woman off feeling more beautiful and more empowered to conquer the world.”

This can include women who lost their eyebrows from chemotherapy or who have general hair loss. When she sees their post-procedure expressions of sheer delight, she knows the chose the right career.

“It is so much more than just eyebrows to a lot of people. This is something that many people outside of the industry may not understand.

“There is nothing like the look on your client’s face after she looks in the mirror, her face wet with tears of joy because your hands have restored the appearance of youth or, in some situations, health.

“Think about that for a second! It is an honor and a privilege to be able to do that for somebody else with your hands.”

Most inspirational quote: “If you can’t beat fear, just do it scared.”

Determining that would be almost as difficult as microblading Jack McCoy’s eyebrows. Archaelologists have found physical evidence of permanent makeup being used as long ago as 5000 B.C.

Suffice it to say that the process is ancient throughout many parts of the world. According to pmuinternational.com, Stone Age people made flower ornaments, animal elements and various symbols on their faces; tattooed mummies dating back more than 4,000 years were found in Egypt; Chinese people were using different tattooing techniques starting around 1000 BC. The first mention of PMU is circa  Cleopatra’s reign (51 BC-30 BC).

But many sources say that in 1891, a New York man with the last name of O’Reilly invented an electric tattooing machine, and that U.S. surgeon Crowell Byrd performed the first-ever tattooing with the machine.